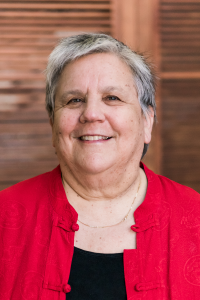 For nearly two decades, Phyllis Robinson has been a tireless advocate for women faculty in STEM.

Throughout her career at UMBC, Robinson has been a strong supporter of professional growth and tenure for women and underrepresented minorities. In 2000, she co-founded the Women in Science and Engineering, a group that represents and advocates for women faculty in STEM. Following its inception, the group’s grassroots advocacy efforts resulted in the implementation of a family-friendly medical leave policy that has become a model for the University System of Maryland. The group, which Robinson continues to lead, also advises women faculty in STEM in developing dossiers for tenure promotion.

Robinson has also been heavily involved in the mentorship of faculty in the biological sciences department. Through her ongoing commitment to supporting faculty development, she instituted a program that provides both on- and off-campus research mentors to junior faculty looking to advance their careers. Her work in this area also addresses the challenges of women and underrepresented minorities transitioning to full professorship by identifying and promoting best practices.

Robinson is a prominent researcher in biology and has received many grants and fellowships from national agencies, such as the National Institutes of Health and the National Science Foundation. She has published more than 40 articles in journals, including the National Academy of Sciences. She has received several awards for her mentorship work, including the UMBC President’s Commission for Women Achievement Award in recognition of her efforts to provide service, leadership, and advocacy for women’s issues.

She received a B.A. and M.A. from Wellesley College and a Ph.D. from the University of Wisconsin.