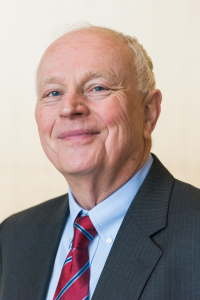 For 30 years, James Franson has been a trailblazer in quantum information. He continues to make major contributions that generate new branches of the field, inspiring researchers around the globe.

His first major breakthrough was in 1989, when he published research demonstrating a new device, the “Franson interferometer,” which now appears in textbooks the world over and provides the foundation for all current quantum communication systems. His research group was also the first to demonstrate quantum cryptography—an unhackable method for securing data—in optical fibers and under daylight conditions. More than 100 research groups around the world now pursue research stemming from principles first published by Franson.

Franson has continued to produce groundbreaking work since his arrival at UMBC in 2006 following distinguished tenures at the Johns Hopkins Applied Physics Laboratory and in the Johns Hopkins electrical and computer engineering department. In collaboration with UMBC colleague Todd Pittman, Franson developed a new approach to linear-optical quantum computing (a variety of quantum computing that uses individual photons as the units of information storage), which has fueled a wave of advances in the quantum information field.

Beyond his commitment to research, Franson’s colleagues describe him as a dedicated mentor to students and faculty, and as a person who continues to push the frontiers of physics research while maintaining an incredible sense of integrity and humanity.

Franson earned his B.S. from Purdue University and his Ph.D. from CalTech.