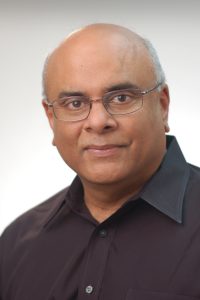 For more than 30 years, Govind Rao has been a disruptive innovator through his research and discovery, and his work has led to the creation of technologies that have revolutionized how doctors and hospitals provide care to patients of all ages and from around the world.

As director of the Center for Advanced Sensor Technology, Rao brings together chemistry, optics, electronics fabrication, micromachining, and molecular biology unlike any other academic laboratory. Under his vision and leadership, the Center has pushed the envelope in its application of fluorescence spectroscopy, resulting in the creation of novel low-cost sensors for monitoring bioprocesses.

Rao and his team are known internationally for developing affordable infant incubators that are powered by solar rechargeable batteries to support premature babies in communities with limited resources, and in remote areas that do not have access to medical facilities. Most recently, the invention earned the 2019 Global Health Research Award from the Academic Pediatric Association, which Rao will receive later this month. He has also developed a more personalized approach to monitoring metabolic parameters in adults using “next-generation sensors” that collect more accurate readings, and monitor and track individual carbon dioxide, glucose, and oxygen levels over time. The sensors allow healthcare providers to receive real-time data for the management of diseases such as diabetes, asthma, emphysema, and lung infections.

He has received numerous awards for his innovative research, including the Presidential Young Investigator Award from the National Science Foundation, the Van Lanen Award from the American Chemical Society, the Gaden Award from Biotechnology & Bioengineering, and has been named a 2003 Innovator of the Year by the Maryland Daily Record. In 2007, he was elected as a Fellow of the American Association for the Advancement of Science. He has published more
than 180 papers in professional journals.

Rao earned his B.S. from the Indian Institute of Technology, Madras and his Ph.D. from Drexel University.