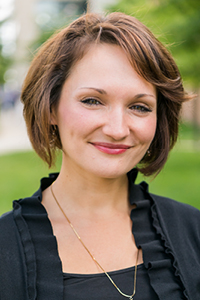 Romy Hübler began her UMBC career as a graduate student in 2011 in the Office of Graduate Student Life. A triple UMBC alumna, Hübler’s work has focused on student-centered initiatives such as Alternative Spring Break, mentoring and academic advising, working with student organizations, and civic engagement. She has earned the respect of the UMBC community for her creativity, resourcefulness, and dedication, and for the care, insight, and attention with which she mentors students.

As a graduate student, Hübler served as an academic advisor, research assistant, and community liaison. The Graduate Student Association recognized Hübler with its highest honor, the Jessica Soto Perez Award, for her stellar contributions to her fellow graduate students’ academic and professional pursuits.

During her time in the Office of Student Life (now Campus Life), Hübler led UMBC’s innovative Alternative Spring Break (ASB) program, which focuses on direct service to the local community. She transformed the (ASB) curriculum, developing components that emphasize deep learning about the intricacies of challenges faced by Baltimore residents, resources available to address those challenges, and options for sustained engagement in Baltimore’s civic life.

In her current role as Assistant Director of UMBC’s nationally recognized Center for Democracy and Civic Life, Hübler has become a national leader in higher education’s civic learning and democratic engagement movement.  She has been directly involved in creating and leading every aspect of the Center’s work, including the Cast Your Whole Vote campaign and Election Extravaganza events series supporting participation in Election 2020.  She is a thoughtful and attentive facilitator, leading small group community dialogues on sometimes difficult topics and making each participant feel heard and understood.

The American Democracy Project has named  her a Civic Fellow in recognition of her leadership in developing and disseminating the Civic Learning and Democratic Engagement Theory of Change, a set of ideas developed at UMBC which is now influencing pedagogy and Student Affairs practices at numerous institutions. She has authored a number of scholarly articles on this theory and has presented it during numerous national conferences and webinars.

Hübler earned an A.A. in general studies from Anne Arundel Community College, and a B.A. in modern languages and linguistics, an M.A. in intercultural communication, and her Ph.D. in language, literacy, and culture from UMBC.