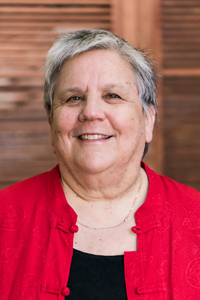 Phyllis Robinson joined the UMBC faculty in 1992. Throughout her career, Robinson has balanced a highly productive research enterprise in her visual neuroscience laboratory with award-winning mentoring for dozens of students at all levels. She has served as the Robert and Jane Meyerhoff Chair in the Department of Biological Sciences since 2018.

Robinson’s research focuses on molecules that convert light into a signal the brain can understand, primarily the function and regulation of melanopsin, a protein found in the retina of most animals, including humans. Melanopsin is most active in the non-image forming visual system, which includes regulation of circadian rhythms and the way our pupils respond to light.
Robinson and colleagues were the first to purify melanopsin and identify its fundamental properties. A leader in this field, she successfully studied how melanopsin is regulated by the addition of phosphate molecules. She is now examining how melanopsin plays a role in larger circadian rhythm patterns and sleep disorders.

Robinson has received nearly $4 million in federal funding from the National Institutes of Health and the National Science Foundation, including two major, highly coveted NIH R01 grants. She has published nearly 50 peer-reviewed research papers. The vision science community has demonstrated its respect for her work by electing her to the International Retinal Protein Society’s advisory board and as chair of the Federation of American Societies for Experimental Biology’s 2022 meeting.

While conducting this pioneering research, Robinson also co-founded UMBC’s Women in Science and Engineering group, which led to the ADVANCE program. ADVANCE has helped UMBC make significant strides in increasing the number of women in tenure-track STEM faculty roles. Robinson’s leadership in this and other efforts was recognized with the 2017 – 2018 Marilyn E. Demorest Award for Faculty Advancement and the 2012 UMBC President’s Commission for Women Achievement Award.

Ever-committed to student success, Robinson is the program director for MARC U*STAR, a scholars program supporting underrepresented students who intend to pursue graduate degrees in the biomedical sciences. Her former students laud her mentorship, which was recognized with the University of Maryland System Board of Regents’ Faculty Award for Mentoring in 2002 and the Leadership Alliance Mentoring Award in 2006.

Robinson earned a B.A. in biology from Wellesley College and a Ph.D. in zoology from the University of Wisconsin.